ChangeMakers is delighted to feature at Screen 2 during the Disappear Here Film Festival in Ballyliffin which runs 23 – 25 September 2022. On Saturday, film club enthusiasts can feast on an afternoon of documentaries and interesting post-show discussions to feed both the intellect and the soul. Join us! 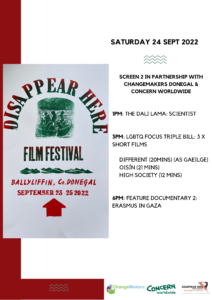 In “The Dalai Lama — Scientist”, the Dalai Lama tells the unknown story, in his own words, of his lifelong journey into the world of science and technology, and how the world has changed as a result. With extensive, rare, and never before seen footage, this film tells the very human story of the Dalai Lama that no one knows.

Summer 1980’s, The West of Ireland. A time and place where homosexuality is frowned upon, a promising young Gaelic footballer, Patrick, falls in love with another young man from his local village.

A single mother longing for connection must choose between her autistic son and the girl next door.

High Society is a Drama, coming of age film about Leah who overdoses on cocaine provided by Gary. The story deals with themes of revenge, immaturity, and love, following a young women Ruby who is in love with her girlfriend Leah. As Leah falls into a coma, through the flashbacks of her memories and her brother’s death, Ruby deals with the aftermath choosing revenge to handle her grief.

Followed by a panel led discussion with Inishowen Pride organising committee members, on the seismic event, and its legacy for the peninsula.

Riccardo, an Italian final-year medical student, is going on Erasmus. The destination: Gaza, a war zone. His friends are shocked. However, it is important to him as he wants to become a war surgeon and is writing his thesis on explosive bullet wounds. Entering Gaza is not easy, he needs permission from three different authorities: the Israeli army, the Palestinian Authority and the Hamas.

Soil & Soul: The Only Difference is U and I: A World Soil Day Celebration

🏠The #BooklessBookclub is back... Join us to ta

🎼As we approach Imbolc and the first national h

''Let us endeavour, together, in our diverse world

Happy New Year everyone! In partnership with Child

Happy New Year. May the year ahead be a good one a

🎄👏Wishing all our #donegal #changemakers a v

We recently held an event in Buncrana, Co Donegal

The pre-Christmas rush can be hectic and yet we ca

🌱🎄🥕If you are considering what to gift th

As we approach Christmas, we reflect back on our 1

👏Join us in congratulating and wishing a Happy