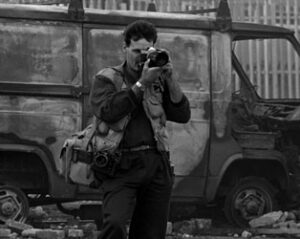 War photography is the theme for the next Disappear Here Film Club on Friday 4 November 2022 at 7:30pm at the Market House, Clonmany, Co. Donegal. A post-show panel discussion will feature local photographer, Brendan Diver of photosfromireland.com and Adriana Valderrama of Ulster University.

Brendan Diver is a Donegal based photographer based in the beautiful peninsula of Inishowen in Co. Donegal. Through his work with Photos From Ireland, Brendan runs landscape and portrait photography workshops and photo tours in the wild rugged and beautiful location of Co. Donegal.

Adriana Valderrama is a Psychologist with a Masters in Peace Studies and Conflict Resolution and PhD researcher in the School of Art and Humanities in the Programme of Heritage and Museum Studies at Ulster University. Her current research examines contested curatorial practice in societies dealing with a difficult past such as Colombia and Northern Ireland. She is the former director (2016-2018) of Casa de la Memoria Museum, Medellin, Colombia. 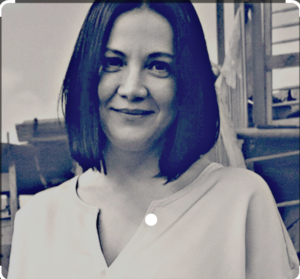 The monthly film night, which is funded by Concern Worldwide, takes place on the first Friday of every month and features issue-led films that spark debate and conversation. Each screening is followed by a talk exploring the local and global connection.

“With the rising phenomenon of ‘fake news’ across the world and the impact of that disinformation, via conspiracy theories, it is important to recognise the power of photography to preserve the true narrative of the past. We look forward to gathering together at our next Film Club to watch Tom Burke’s great documentary. After, we will reflect with local photographer, Brendan Diver on important questions including: how can photography assist the curbing of disinformation and what are the free speech implications around it? Brendan will also reflect on his own work with photosfromireland.com capturing the beauty of the Donegal landscape.”

A powerful documentary by Tom Burke about the men who unwittingly became war photographers on the streets of their own Northern Irish towns.

They did not leave home in search of war and adventure: the violence erupted around them. They expected a career of wedding photography and celebrity photo-calls and instead the images they produced during the worst years of the Troubles would come to define that conflict.

The press photographer deals in single images that must distil story, character and context into a single frame which is often more impactful than moving images of the same event. What did it cost these men to take those pictures? What was the value of those images as the conflict raged on for 25 years? These moral and ethical questions are at the heart of this illuminating documentary by Tom Burke (Losing Alaska, The Liberties).

Entry to the film and post-screening discussion costs €7.50 and all proceeds go to the newly established ‘Donegal Documentary Fund’, to raise awareness of socio-political and environmental issues in the county.

Soil & Soul: The Only Difference is U and I: A World Soil Day Celebration

Stories of a Home : A story exchange workshop to reflect on the meaning of home

At next Wednesday's STORIES OF A HOME workshop, pe

🌎 World Soil Day is coming up on Monday 5 Decem

Stories of a Home, a workshop by Francine Blache B

Let's sow some seeds of change this Thursday 17 No

🌍 Join us for an online workshop, Think Global,

👏Thank you to all the Film Clubbers who joined

One of the iconic images that features in tomorrow

Interested in applying for our Seeds of Change Gra

'In the season leaves should love, since it gives