Our second film is the powerful documentary ‘Losing Alaska’ from Director Tom Burke. 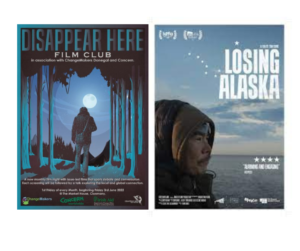 The 375 residents of Newtok, Alaska watch their homes disappear into rolling seas as winter storms steal their coastline and melting permafrost erodes the edges of their town. Tom Burke’s elegiac study follows the community as they struggle to maintain their traditional Yup’ik culture, a subsistence lifestyle of hunting and fishing, and build a new town on safer, higher ground.

Our post screening discussion will include Donegal Green Party Chairman Michael White, Rosemary Mc Closkey, Vice Chair of Inishowen Rivers Trust and Duncan Stewart, Environmentalist, Activist and Architect, talking about how these issues are of local as well as global concern.

Entry to the film and post-screening discussion costs €7.50 and all proceeds go to the newly established ‘Donegal Documentary Fund’, to help raise awareness of sociopolitical and environmental issues in the county.

The ChangeMakers Guide to Global Justice for Community Groups and Individuals

At next Wednesday's STORIES OF A HOME workshop, pe

🌎 World Soil Day is coming up on Monday 5 Decem

Stories of a Home, a workshop by Francine Blache B

Let's sow some seeds of change this Thursday 17 No

🌍 Join us for an online workshop, Think Global,

👏Thank you to all the Film Clubbers who joined

One of the iconic images that features in tomorrow

Interested in applying for our Seeds of Change Gra

'In the season leaves should love, since it gives